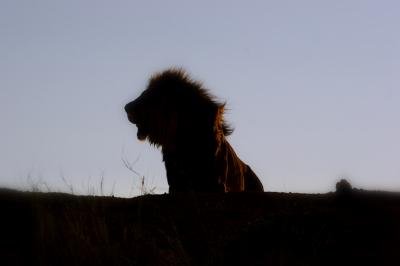 Lion can be hunted on a minimum of a 5day Safari or it can be added to your Big Game Safari for a trophy fee. Mozambique Lion hunts are minimum 14days.

The African Lion, often referred to as the king of the jungle, the largest cat specie in Africa and the top of the food chain when it comes to predators. These mega cats will successfully hunt any specie in Africa. His mighty roar that sounds like the rumble of thunder is often associated with the sound of Africa.

The most common method to hunt these predators is over bait, either from a blind or by stalking the bait. In some areas where there is soft sand like in the Kalahari these cats are hunted successfully by tracking and stalking them. Lion hunting is very exiting, seeing the size of the track and hearing the intimidating roar will get the adrenaline pumping long before you first lay eyes on it. These felines deserve your utmost respect. They are extremely dangerous and fast, they are capable of covering a 100yards in less than 4 seconds and weighing up to 700lbs they only have to run into a person at full speed to break every bone in ones body. With very large, up to 3inch retractable claws and canines of around 2 ½ inches they are well equipped to kill a human quickly. Lions attack hundreds of people every year across Africa and it is estimated that one only has a 30% chance of surviving a lion attack. It is documented that 815 people where attacked by Lions from 1990 to 2004 in Tanzania alone. The minimum legal caliber to hunt these cats is the .375, with soft-nose bullets and good shot placement Lions will often drop in their tracks. They are sensitive to hydraulic shock that will shut their nervous system down temporally but approach them with caution. These cats are very vindictive when wounded and will not hesitate to attack whoever was hurting them. The attack would be with deadly intent and they would single out one person in the group, usually the one that is slightly separated from the group, (camera men take note). Listen carefully to your PH’s instructions when hunting the African continents largest predator.

Lions spend much of their time resting and are inactive for about 20 hours per day. Although lions can be active at any time, their activity generally peaks after dusk with a period of socializing, grooming, and defecating. Intermittent bursts of activity follow through the night hours until dawn, when hunting most often takes place. They spend an average of two hours a day walking and 50 minutes eating

Lions live for 10–14 years in the wild, while in captivity they can live longer than 20 years. In the wild, males seldom live longer than 10 years, as injuries sustained from continual fighting with rival males greatly reduce their longevity. They typically inhabit savanna and grassland, although they may take to bush and forest. Lions are unusually social compared to other cats. A pride of lions consists of related females and offspring and a small number of adult males. Groups of female lions typically hunt together, preying mostly on large ungulates. Lions are apex and keystone predators, although they scavenge as opportunity allows.

The longest known lion, at nearly 3.6 m (12 ft) in total length, was a black-maned male shot near Mucsso, southern Angola in October 1973

The heaviest lion known in the wild was a man-eater shot in 1936 just outside Hectorspruit in eastern Transvaal, South Africa and weighed 313 kg (690 lb).